Now on view | until 11 september

Until September 11 2022 Museum Flehite in Amersfoort presents the first large retrospective exhibition of the Dutch master painter Mathias Withoos. The 17th-century painter is renowned internationally for the dramatic, caravaggian light in his panoramic townscapes and detailed still lifes. The exhibition 'A different Light on Withoos – Three generations Withoos' shows ninety Withoos creations; of father Mathias, his children and of the contemporary photographer and descendant Hans Withoos.

The exhibition is documented in an extensive monograph and oeuvre catalogue of Withoos’ work, compiled by guest curator and Mathias Withoos expert Albert Boersma. Also a catalogue with photographic work by Hans Withoos is being published.

A painter’s family from Amersfoort

Mathias Withoos is the most famous Amersfoort painter from the latter part of the seventeenth century. This eldest son of fustian worker Jan Withoos had eight children with his wife Wendelina van Hoorn, four of whom were apprenticed by Mathias as a painter: Johannes, Pieter, Alida and Frans.

The multi-layered exhibition gives a representative overview of the impressive body of work by Mathias Withoos and an impression of the work of his painting children. The oils and the refined, elegant gouaches are presented against extensive historical background information, comprising of paintings by contemporaries or sources of inspiration and old books, scale models, maps and drawings. Hans Withoos’ photographic works interact with the paintings.

Museum Flehite commissioned the restoration of the monumental, 350 year old 'View on Amersfoort' by Mathias Withoos, which started in April 2021. Withoos’ young apprentice Caspar van Wittel possibly contributed to this painting in 1671. In the exhibition one of the biggest town views in the Netherlands (a generous 2 by 4 metres) is again to be admired in the light and with the vivid colours Withoos once used when creating this impressive canvas. The museum expects to add 'View on Amersfoort' to the exhibition in April.

Mathias Withoos (Amersfoort, 1627 – Hoorn, 1703) learned his art from the master builder and painter Jacob van Campen. When about twenty, he went to Rome as a master painter, for further education and inspiration. A few years later he returned in 1652 to Amersfoort and fled to Hoorn in 1672, the Disaster Year. Mathias was a very religious and erudite person, very knowledgeable about flora and fauna and the symbolism of transience. As a precision painter, he specialized in vanitas paintings, woodland still lifes (sottoboscoes), pleasure gardens and Italianising landscapes. Focusing on light and dark helped him illustrate the connection between heaven and earth. The hidden messages in the paintings provide food for thought.

Hans Withoos (Son en Breugel, 1962) studied textile design and photography at the Academie voor Beeldende Vorming (Academy of Visual Arts) in Tilburg. He has been a photographer for more than thirty years and exhibits frequently and internationally. As a visual artist, he’s a romanticist and a storyteller, deeply fascinated by beauty in all its forms. His photographic paintings testify to the aesthetics of alienation. In the series 'Withoos meets Withoos, The People' the photographer gives a new interpretation to the paintings of his distant ancestor Mathias, adding to them people and life. He combines the still lifes and town views with contemporary, surrealistic images, shedding a different light on transience. In his colourful work diversity and inclusivity play a prominent part. The textiles designed by him personally are based on the work of his ancestors and incorporated in the clothing of the models. 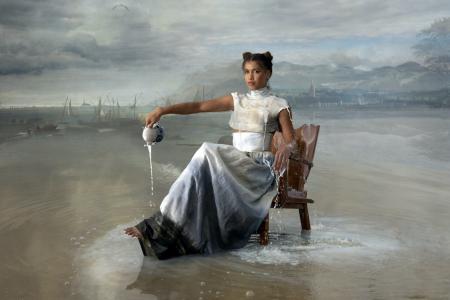 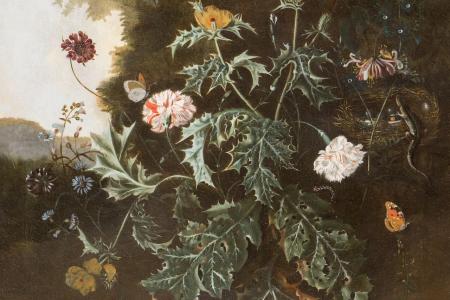 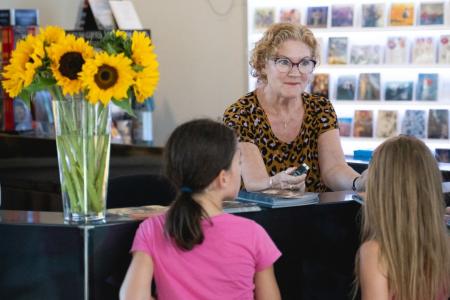