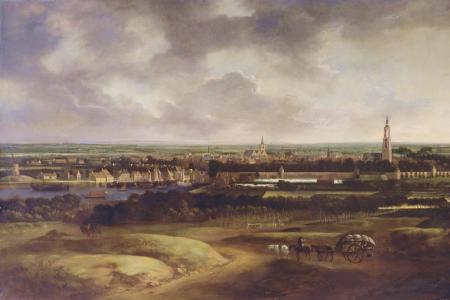 In 1671, the city was still contained within the medieval city wall. In the foreground to the left, we see the river Eem with cargo ships illuminated by the sun, and the Koppelpoort gate. The most important buildings of the era - the Sint-Joriskerk and Onze-Lieve-Vrouwekerk churches - are located in the city centre. As we can tell from the many spires, the city still contained a large number of monastery buildings in the 17th century. The city is surrounded by the green landscape of the Gelderse Vallei, and we can see the Veluwe in the background. 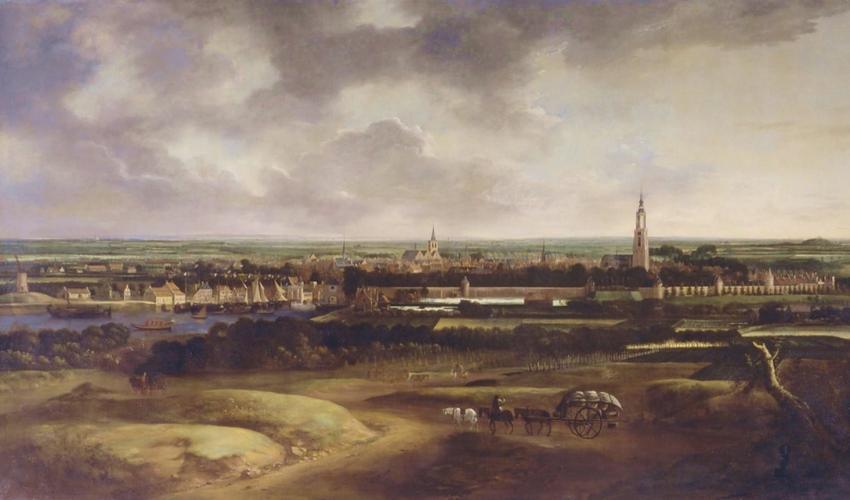 Withoos painted his home town's main industries. For example, we can see tobacco cultivation: the area outside the city wall on the left features numerous tobacco drying sheds. Nearby, we see another important product: textile, bleaching in the grass by the wall. The ships in the Eem represent Amersfoort's role as a transport hub for trade between Germany and Holland.

Withoos was a prominent figure in Amersfoort: he ran the local orphanage for several years, and served on the board. His own city council commissioned him to paint this cityscape. Whithoos painted a smaller example first to show what he had in mind. The large painting is more than 4 by 2 metres. He received 600 guilders for his efforts, twice the annual salary of a carpenter. He fled to Hoorn with his wife and children in the Disaster Year 1672, and lived there until his death.